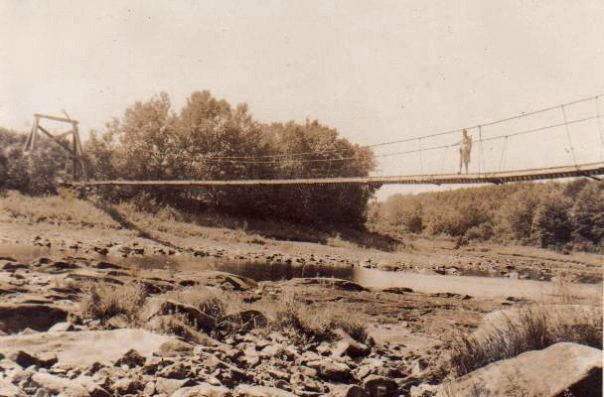 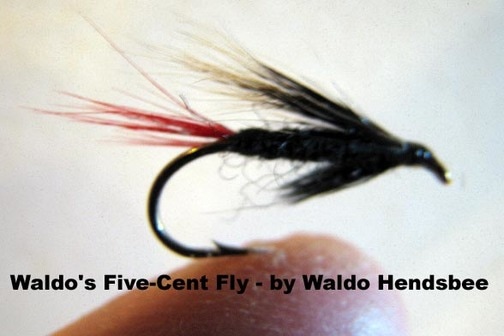 Recently I had a visit from Delbert Hendsbee of Antigonish, Nova Scotia. We talked about fishing, mostly, and Delbert told me a story that few, until now, have heard. This story concerns Delbert’s late father, Waldo Hendsbee, and his somewhat legendary little salmon wet fly, “Waldo’s Five-Cent Fly”.

But first, some background on Waldo. Born in Isaac’s Harbour, Guysborough County in 1914, Waldo and his wife raised a family in the nearby community of Eight Island Lake, near Goshen. Molly and I attended their 50th wedding anniversary celebrations at their home, where we met the entire family. Don MacLean’s book, A Little Thing I Tied Myself, (Nimbus Publishing 2006), says that Waldo fished trout throughout his life but didn’t take up salmon fishing until he was in his fifties. “Once he started salmon fishing he lived on the river.”  Delbert attributes some of his father’s success as an angler to his great eyesight. “He could read water and see fish better than anyone.”

The west branch of the St. Mary’s River was Waldo’s favourite, and it was here that he developed the skill of an expert salmon angler. His bag of tricks to entice salmon was much deeper than that of most anglers, but occasionally he would share one of his closely guarded secrets with novices like myself. Pools like Cumminger’s, Indian Man, the Footbridge and Harrison’s were Waldo’s regular turf. “He tied 4400 flies the winter before he died,” Delbert says, and he used the same fly-tying gear from when he started tying long ago right up to the end. Delbert still ties on his father’s old vise.

One of these beautiful West River St. Mary's pools, the Footbridge Pool, is the setting for our story, told to Delbert by a fishing friend of Waldo’s named Walt. Both Delbert and I have spent enough time on the river to know that most fish stories are somewhat exaggerated, so we can’t be positive the story is entirely true, but he assured me that I would hear it exactly as Walt told it to him.
​
“Waldo and Walt drove upriver to Smithfield, geared up and waded across the river to fish the Footbridge Pool. They had noticed that there were two young men fishing the pool, and Waldo engaged one of them in conversation when they arrived. When asked how their luck was going, Waldo was told that they had seen several fish jumping and rolling, but that they had hooked none.”

“Waldo had tied up a few very small flies for the occasion, all of the same design, unnamed. He tied one to his leader and when his turn came to fish the pool he promptly hooked and landed a grilse. Walt and the young men each followed in turn with no luck. Waldo fished the same fly on his next turn and caught another grilse, making his two-fish limit for the day. Waldo then gave Walt an identical fly and Walt caught a fish on it also.”
“Waldo and Walt had to leave at this point, but first Waldo gave one of the young men another identical fly. The young man was very grateful and as he tied it onto his leader he told Waldo that it was a fly of great value. Waldo replied that it had cost him only five cents to tie. After wading back across the river to the path leading to their car they glanced downriver and saw one of the young men waving to them. His friend was playing a fish, presumably on Waldo’s Five-Cent Fly!”